Tonight
Partly cloudy, with a low around 1. North wind around 5 mph becoming calm after midnight.
Thursday
Partly sunny, with a high near 23. Light and variable wind becoming south southeast 5 to 10 mph in the afternoon.
Thursday Night
Mostly clear, with a low around 8. Wind chill values between -5 and 5. South southeast wind 5 to 10 mph.
Weather forecast provided by weather.gov.
Sign In LinkSearch
Main Navigation 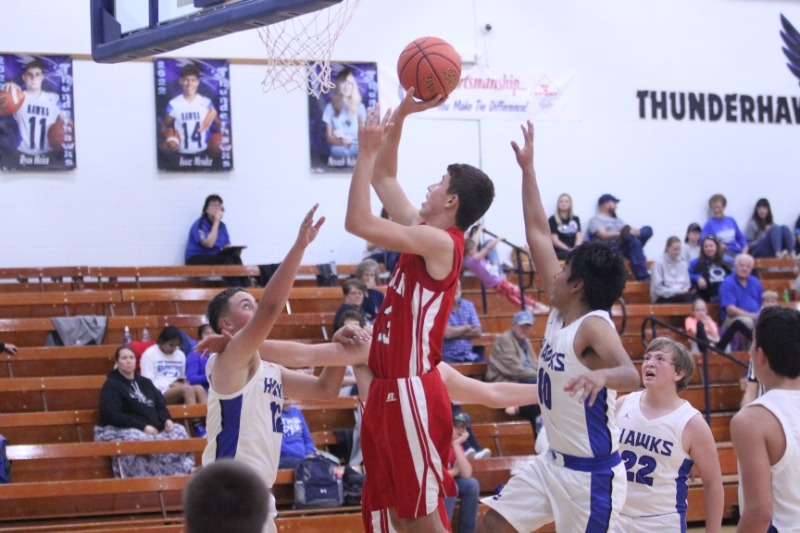 On Friday, December 3rd the Logan/Palco Trojans opened their season at Grainfield against the Wheatland/Grinnell Thunderhawks. The first game of the night saw the Lady Trojan JV girls with a 36-32 victory. In the next game of the evening, the Logan/Palco JV boys put up 67 points to earn a 67-32 win. In the varsity contest the Lady Trojans faced a game opening, fast pace and aggressive full court press. At the end of the 1st quarter they found themselves in a 13-23 deficit to the Thunderhawks. The Lady Trojans were able to cut the lead to singe digits occasionally, but in the end fell to the Thunderhawks by a score of 43-67. Logan/Palco was led by senior Kirsten Marcotte with 6 points, 7 rebounds and 4 assists and sophomore Mara Kats with 11 points and 6 rebounds. In the final game of the evening the crowd was entertained by a nail-biter for the whole game. The lead teetered back and forth rarely by more than 5 points, but in the end, the Trojans prevailed by a score of 52-49. Leading the Trojans were seniors Ty Kats with 24 points, Josh Uhland with 13 points and 8 rebounds and Dylan Van Laeys with 10 points, 16 boards and 3 assists.

Next week the girls will play at Brewster at 3:00 in the Sagebrush Shootout while the boys have picked up a game against Thunder Ridge in Stockton at 7:30 because of the first round bye in Brewster.

The Lady Trojan Junior Varsity had a short night after the late night in Grainfield and then a early morning tournament in Phillipsburg. On Saturday Dec. 4th the Trojans suffered losses to Phillipsburg and then Norton, but gained some valuable experience and conditioning during the morning. Their next action will be on December 14 in Almena against the Northern Valley Huskies.